Earlier this year, we announced the exciting news of our addition of a second location in Pennsylvania. It has been a thrilling past few months getting the operations up and running. One of the people who has played an integral role in this success is Ryan Newell, Director of Manufacturing at our East Coast location. I had the privilege of getting to know Ryan better and what has made him proud to be a part of the Nahan team after only a few short months.

“One of my favorite parts about my job is producing something that is top quality and wows clients. Then add the fact that I get to be a part of a team that is so collaborative. We’re always learning from each other.” 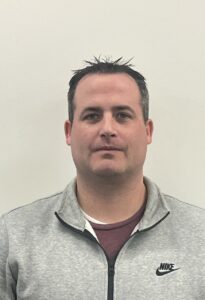 Ryan joined the Nahan team in March 2022 as a Production Shift Manager  at Nahan’s East Coast location in Montgomeryville, Pennsylvania. In July 2022, he was promoted to Director of Manufacturing. Ryan began his direct mail career as a technician in Prepress, later moved to a Direct Mail Specialist in Lettershop, and then was promoted into various management positions. When asked what professional accomplishment he is most proud of, Ryan says that leading an initiative to implement a digital print platform is top of the list. And now he is excited to be adding starting and expanding the Nahan East Coast operations to that list. We are excited about what this second location means for the future of Nahan and the additional ways we can serve our customers. Ryan’s efforts are have been a huge part of driving success for Nahan East.

“The best piece of advice I’ve ever heard is to work hard, don’t cut corners, and always give the maximum of your ability.”

When Ryan isn’t busy helping lead the way for Nahan East, he enjoys spending time with his family in the beautiful mountains of Pennsylvania. You can almost always catch Ryan doing something outdoors in his free time. Whether it is fishing, hiking, hunting, or playing a round of golf or cornhole, Ryan’s there for some fun and fresh air. Thank you Ryan for being a dedicated member of our team!

Author Bio: Camille Lehmann is a Senior Marketing Specialist and has been on the Nahan team since January 2020. Camille is responsible for managing Nahan’s social media, blog content, and other internal and external content communications. She graduated with her Masters of Science in Marketing with a specialization in Project Management in 2020. In her spare time, Camille enjoys visiting new coffee shops and restaurants with friends, playing tennis, and finding new Pinterest projects.