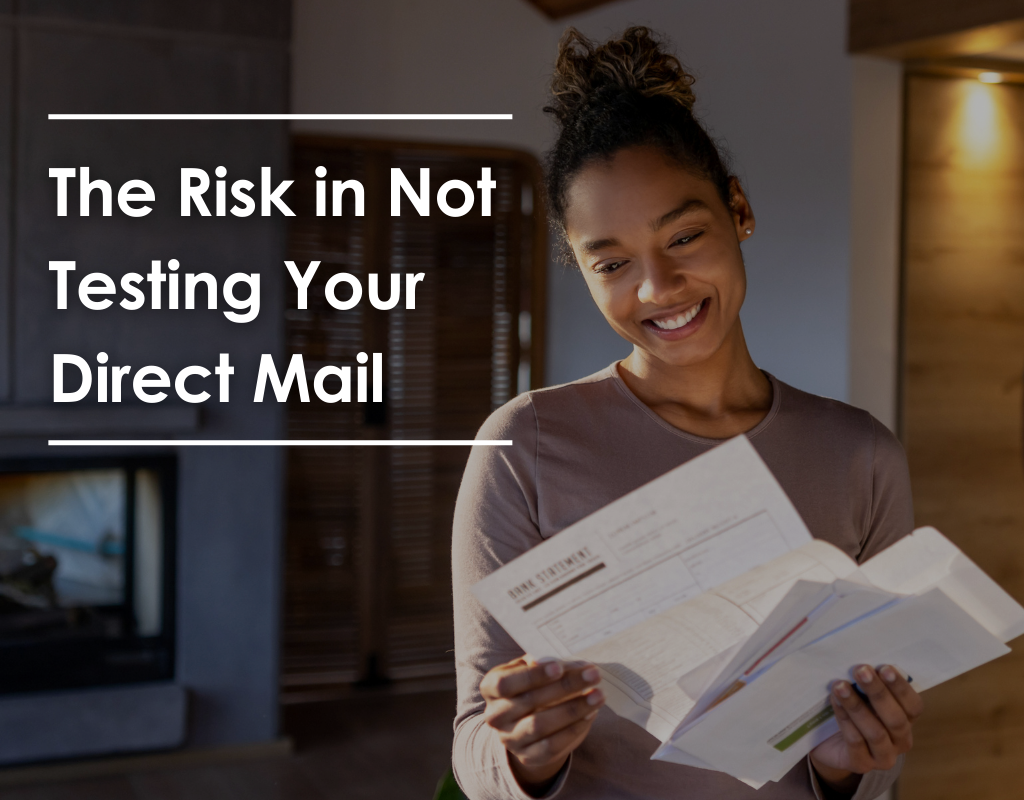 If you’ve been in the direct marketing space for any amount of time, you’ve certainly heard about the importance of testing. But “testing” means different things to different people, and we see people approach it in a variety of ways. My colleague, Maggie Stack, recently published a blog on Direct Mail Testing. Consider this a prequel – insights into the risks of not testing.

Some marketers don’t test on a consistent basis or simply don’t test at all. After mailing the same creative package, list or offer, for months or even years on end, they experience the inevitable performance decline, and think it may be time to test a new creative. Their creative team or agency offers a new creative that hopefully out-performs the old one and then the process repeats itself. Still other marketers occasionally test but are so risk averse that they test small creative attributes, such as a headline in a letter or on an envelope, which rarely moves the performance needle. And data testing happens less frequently than creative testing, even though data has a more significant impact on results.

A Fear of Testing

Why the reluctance to test? Some marketers simply don’t know how. Others may not want to risk the company’s budget on a test that may not out-perform the control. Sometimes it’s a combination of the two – “I don’t know how – so why take the chance?”

What About Data Testing? I hear less about this than creative testing.

Why is there so little data testing? Data can be tougher to test – nowadays it would be less likely for us to test an entire list. With the cost of postage, we must be as precise as possible. Segments or model groups within an audience are not always easily explained or understood. Many lists should not be mailed without the use of effective predictive models to rank prospects. It feels riskier than changing a creative headline, or maybe data is managed by another group in the organization.  Maybe the data testing setup and measurement can feel daunting. We can hold and touch creative – it feels more “real” than data and many of us like to think we intuitively know what works in creative when it’s sometimes best left to the direct mail creative experts. 😊 And yet data has a larger impact on response than creative.

The Risk in Not Testing Your Direct Mail

Some might apply the old saying “If it ain’t broke, don’t fix it” to direct mail testing. I would argue if it ain’t broke yet, it will be some day.  I would say that there is greater risk in NOT testing. Every creative package’s performance declines over time, and if you wait until that happens you could find yourself many months away from a new, high-performing package. The same applies to data. Doing nothing is short-term thinking that, over time, delivers inferior results. Regular testing is an investment that puts the long-term odds in your favor. Every test is an opportunity to learn and improve.

How frequent should testing be done?

Testing must be a regular ongoing process. Ideally, that means part of every campaign or at least testing quarterly. The aim is to develop a stable of high-performing creative packages and a precisely optimized audience by testing new data sources and predictive models to continually improve results.

We can make testing work for you. Testing is both art and science – Nahan offers both. We will continue to cover various aspects of testing in upcoming blogs.

Bio: Alan Sherman is our Vice President of Marketing Strategy. Alan enhances Nahan’s current value proposition with strategy solutions that support new/existing client relationships. For clients, he leverages market, customer, and competitive intelligence to build achievable strategies for omnichannel marketing success. His marketing plan strategies include targeted data, predictive analytics, testing, and creative that drive ongoing client performance improvement. In his spare time, Alan enjoys spending time with his family, traveling, going to concerts, watching sports (he’s a fan of the NY Giants, Boston Red Sox and Celtics), and walking the dog, even though it was just out.