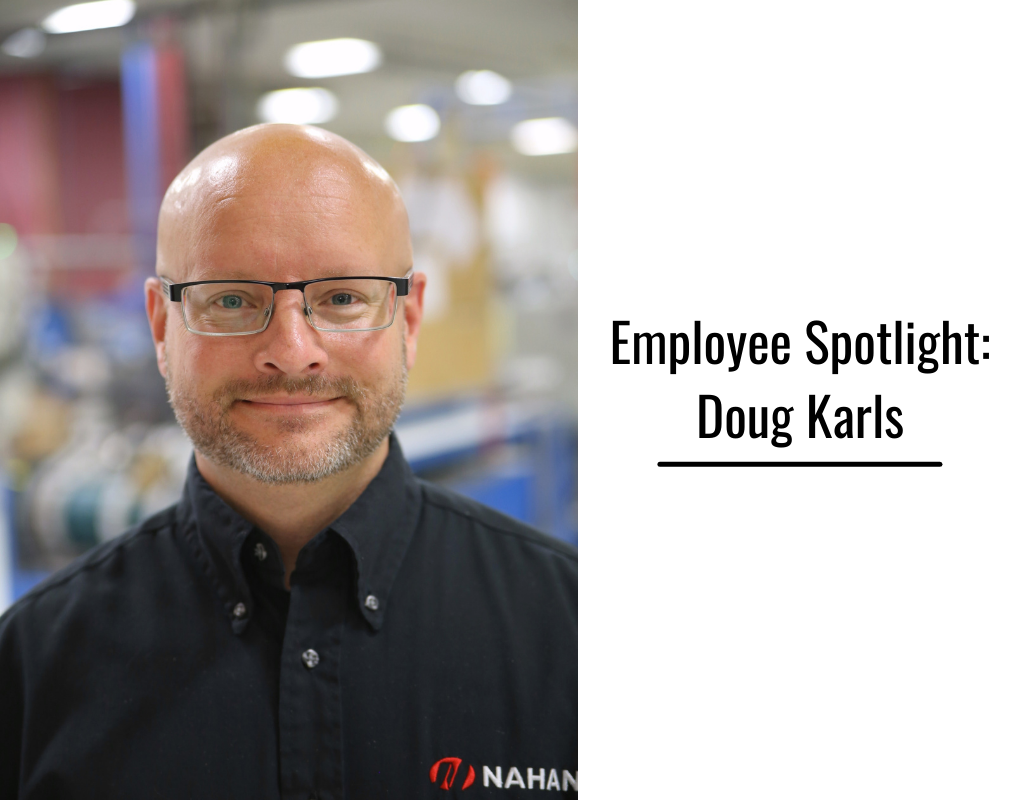 One of the aspects we pride ourselves on most at Nahan, is our top-notch team. We are so thankful to have employees that support our effort in building and maintaining an amazing team. Doug Karls, one of our production trainers, plays a significant role in this effort. I had the privilege to get to know Doug better, learn about his time at Nahan, and how he enjoys his time outside of work.

29 Years of Dedication to Nahan

Doug Karls began working at Nahan as a Helper in 1992. Over the years, he gained experience in several positions throughout the company, including a few years each as a Folder Operator, Cutter Operator, and Stitcher Operator. Doug then spent 14 years as a Shift Leader until becoming a Production Trainer in 2019. Since the opening of Nahan University in July of 2019, Doug has been an integral part of leading the program’s training initiatives. His longevity and dedication to Nahan is something he is proud of and he greatly enjoys how that has allowed him to learn about different departments at Nahan. Being a part of a company with an exciting vision for the future that continually strives for growth in all areas, is something that makes Doug excited about being on the Nahan team.

“My favorite part about my role at Nahan is helping new employees get the right training they need so they can achieve long term success as a Nahan employee.”

Doug credits Michael Jordan, John C. Maxwell, and Simon Sinek as people who inspire him. Their work ethic, commitment, and leadership are qualities Doug admires and hopes to reflect in his role in training others at Nahan as well. In his free time, Doug enjoys watching the Vikings, Twins, and Wild teams play. Additionally, he likes to look for new smart home gadgets that he is sure he doesn’t need, spend time outside, and binge watch tv shows. In the future, Doug also hopes to travel to other areas of the world and eventually retire to Florida.

“The best piece of advice I’ve ever been given is to always ask yourself, ‘what did you learn today?’ You will find that you always learn something new no matter what.”

If you are interested in learning more about a career at Nahan, visit our careers page or contact us to learn more.

Bio: Camille Lehmann is on the Marketing team and started with Nahan in January of 2020. Camille is responsible for assisting in Nahan’s marketing strategies and goals. She graduated with her Master’s of Science in Marketing with a specialization in Project Management in 2020. In her spare time, Camille enjoys writing, going to coffee shops, and spending time with friends and family.